Harold had one wish, to keep the memory of his late wife alive by honouring her in her beloved workplace. With this in mind, his gift enabled a refresh of the Emergency Department family room, making it more welcoming for families who have a loved one in a trauma situation. 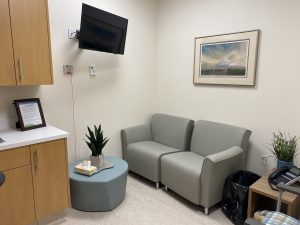 While the room was furnished by AHS, Harold’s donation of artwork, plants, and framing for some of Grace’s needlepoints were added to warm the space. In addition, Harold wrote this lovely letter in memory of Grace which has been framed and placed in the room for families and staff to read.

Grace Elizabeth Niebergall (Syverson)
Grace was born on May 27, 1943, in the Medicine Hat Regional Hospital. Her parents, Frank and Hazel Syverson lived on a ranch/farm in the Vale District, about 25 miles North East of Medicine Hat. She joined her brother Wayne, born February 16, 1938. She was later joined by Lorne, born November 17, 1944, and Keith, born January 24, 1952.

Grace attended Rush Lake School for her elementary schooling, and then attended Medicine Hat High School, graduating in 1961. Grace wanted to be a nurse from the time she was quite young. She was accepted into the School of Nursing in the fall of 1962, graduating in 1965 with a Nursing Diploma and Bedside Nursing Award.

She spent some time nursing in the United States and returned home in 1966, taking up nursing at the Medicine Hat Hospital in Emergency. Emergency and ICU were her favourite areas of nursing, and she always worked in those areas throughout her nursing career.

Harold worked for Sears Canada Inc. and was transferred to a number of places over the years. Grace continued working parts of those years, always in Emergency or ICU. She was an avid supporter of the Nurses Union and held various positions with the unions in the many different hospitals she worked in.
They finally settled in Sherwood Park in 1991. Grace did Home Nursing, then joined Canadian Blood Services, a job she really enjoyed.

Grace suffered a cerebral bleed in October of 1997, spent a month in the hospital, but never fully recovered. She wasn’t able to return to work, so she retired and continued her hobby of cross stitching and spending time with her family and grandchildren. Grace passed away on September 21, 2013, of another cerebral bleed. She is buried in Nature Walk of Glenwood Memorial Gardens in Sherwood Park.

She had an amazing laugh (Syverson laugh), and she enjoyed life fully and unconditionally. She continues to be missed by her family and friends. We believe she would be honoured to be part of the family room in the Emergency / Trauma area of the Medicine Hat Hospital and we are thankful to the health foundation for making this happen.

Thank you Grace and Harold for your contributions to healthcare, and for truly making a difference.

If you would like to honour the memory of a loved one through a donation or updating a space at the Medicine Hat Regional Hospital, please contact us.